I grew up with a British father and an Italian mother, and I remember my father often complaining about the “Zanesi conversations” he had to sit through at mealtimes with  my mother’s relatives, (the Zanesi’s), in Italy. If there were fourteen people sitting around a table, there would be at least three conversations going on, at full volume, and if someone overheard something interesting from a conversation at the other end of the table, they would shout out things like, “Who said that?”, “When was this?”, “No, that’s not what happened!” If the noise levels prevented people from hearing what was said, they would either shout louder or physically leave a conversation to join another. During the meal. 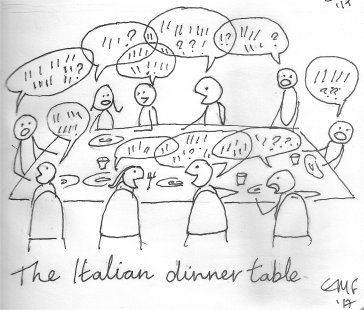 For my father, this was anarchy and pandemonium. At our dinner table at home in England, he behaved like the chairman at a meeting of the board of directors. Ok, there were no minutes, no gavel and no written agenda circulated before the meal, but the rest of us did not speak unless we were spoken to; interrupting and talking over each other was forbidden; our opinions on things were solicited, not volunteered; and all discussion was moderated by my father.

As an adult, I got to see these Italian and British behaviours replicated in their respective workplaces, and I have already written (here) about the extremely different cultural expectations we have around the world about how to conduct a meeting. A lot of my work involves helping Italian senior managers to identify what behaviours work best when you operate in a global context, and then to become confident players in this arena.

What we should really pay attention to when conversing

Being a confident player in the global arena in a second language can be an extra challenge. Our working memory and attention are limited, and when we’re speaking in a second language most of these scarce resources are taken up by anxiety about expressing ourselves correctly and understanding what people are saying to us. Very little attention remains for the important stuff:

Communicating in a second language can also be exhausting. A client told me recently how he had to spend a day driving across Italy with the German global director of his division, talking in English, mostly about work. If driving for eight hours while conversing in his second language wasn’t enough, when they finally arrived at their hotel, the German director invited my client to join him for dinner. “I couldn’t say no,” my client told me. “But I felt like bursting into tears.”

So, my first task when I’m working with Italian global players is to try to convince them to stop focussing on their second language, and to free up their attention for the more important things.

A defining characteristic of Italians is that they like to talk; they like to talk A LOT; and they are very good at talking. At school in Italy, most tests and exams are oral, so Italians are trained from an early age to stand up in front of people and speak, and grow up to be confident public speakers, who enjoy showing off their expressive ability.

More importantly, Italians don’t share these characteristics with many other cultures.

Who is responsible for making sure the message has been understood?

Something I’ve noticed is that different cultures deal in different ways with the responsibility for understanding what’s said in a conversation.  In Italy, the speaker is responsible for ensuring clear communication. In practice, this means an Italian will repeat what they are saying over and over again, until they’re sure their message has got through. This also means that Italians don’t check understanding with each other. If you say to an Italian, “I’m sorry, I’m not sure I’ve understood what you said,” an Italian could take this as an insult, as in, “Are you suggesting I didn’t make myself perfectly clear?!”

In British culture, the person listening is responsible for understanding what’s said in a conversation. For Brits, for whom public speaking is more stressful than divorce, redundancy and death, checking understanding is a routine part of conversation, as is apologising for failing to make yourself understood.

Also, in British conversation, “less is more”. This means that the British speaker will not repeat what they say, and if they do, the listener could take this as an insult, as in, “I got you the first time. Do you think I’m stupid, or something?”

So, the first challenge my Italian global players need to overcome is the Italian cultural taboo of asking for clarification in conversation, which, apart from being essential when dealing with most northern Europeans, is an important strategy for participating in and controlling discussions.

When more is more

The second challenge is to speak less and listen more, which is related to the third challenge, focussing on one conversation at a time.

To British senses, the Italian style of group communication seems to have no rules, and results in a kind of dawn chorus of everybody talking at the same time, repeating the same things over and over again, at full volume. In fact, Italians adopt a multi-tasking attitude to communication, which seems to emerge from the parallel processing of a multitude of different voices. For Italians, more is more.

To Italian senses, the British serial-processing-style of communication is rigid, inefficient and lacking in human connection.

To accommodate more northern European and introverted cultures when working in an international context, I help my Italian clients learn to do more with less.

What is your relationship with your workplace?

These styles of communication are reflected in British and Italian people’s very different relationships with their workplaces.

British workers prefer to focus on tasks, to communicate by email and voicemail (a technology Italians have never heard of), and face-to-face or tele communication tends to be reserved for formal meetings.

For British workers, there is an almost tangible separation between “work life” and “life”. At 5.30 pm British workers will leave their offices and work personas behind, and adopt their private personas. The British work and private personas have different personalities, habits, goals, communication styles and even wardrobes. The British work persona is the one who aggressively jostles for position with his or her colleagues all day at work, whose time belongs to the company, and will wear if not formal, then sober clothes. The British private persona is the one who goes to the pub with his or her colleagues after work and drinks him or herself into a state of extravagant extraversion, and who dresses very – very – casually.

More than one Italian client of mine has described experiences of hosting a British visitor, usually a senior manager, and arranging to go out for an evening meal at a nice restaurant, and their guest turning up to the restaurant “dressed like a homeless person,” in shorts, ancient t-shirt and flip-flops.

Italian workers have no concept of having different personas for different parts of their lives or of “work-life balance”. Italians dress elegantly at work, at the weekend, in the home, at barbecues, in the mountains, on the beach. Also, Italians will not think twice about dealing with family-related issues during work hours, because family is central to Italian life, and takes precedence over everything.

How British managers express their secret real selves at work

Italian managers have often told me about sitting in meetings with British male managers, who are otherwise formally-dressed, and being completely distracted by the socks – and hairy shins – being displayed beneath their British colleagues’ trouser hems. Brightly coloured, vividly-patterned socks that a clown would wear, that don’t even reach mid-calf.

Italian men’s socks are made of fine natural fibres, are knee-length and come in fawn, navy and black.

It’s incredible how something as apparently trivial as socks can provoke atavistic feelings of dealing with something foreign and barbarian. Not being able to find proper socks in shops in Dublin was the last straw for one young Italian manager I know who tried and failed to adapt to working in Ireland.

This is the third in a series of posts about Pragmatics, the science of the rules of communication, and I have focussed on national cultural differences. Watching out for your own cultural expectations when you are working in an international context is, in my experience, essential for successful communication and relationships.  The good news is that the more you practice using cultural awareness tools, the easier it gets to “assume the best” about what’s happening in ambiguous situations with a high potential for misunderstanding. Developing contextual intelligence is one of the most important pragmatic skills we can learn to function effectively in an international context, especially if we are doing this in a second language.

A reminder of why thinking about national cultural differences is important

In case you are still not persuaded, please look at the infographic in Tarun Khanna’s HBR  article about the importance of contextual intelligence, where he discusses why most successful and profitable companies fail to be successful and profitable when they cross national borders.  Companies routinely enter new markets assuming that their knowledge of how their industry works and the competencies that led to success in their home markets can be applied to any country. In 2001 Tarun Khanna and Jan Rivkin started computing the average profitability of individual industries in 43 countries to test this assumption. In 86% of the country pairs studied, they found no correlation of industry profitability: a profitable industry in Sweden, for example, cannot be assumed to be profitable in Singapore. The same is true for more than 750 other pairs. These alarming results suggest that what you learn about your industry in your home market may not help you at all, and even prevent you from succeeding in a new market.

In my next post, I will give some examples of pro-survival communication strategies for the global arena.

Do you think you would benefit from developing these skills?

RSS link for your reader

I have extensive experience in both management training. I provide a fun, interactive and meaningful experience that delivers specific, tangible and measurable results, in line with my client's objectives. Follow the links to find out more about what I can do for you.

I help executives and their teams manage organisational change and innovation through coaching and facilitation of creative problem-solving processes, I deliver services in English, French and Italian. I have worked in many different cultures and industries, from West Virginia to Mumbai, from PR to hi-tech. Follow the links to find out how I can help you.

RSS link for your news reader